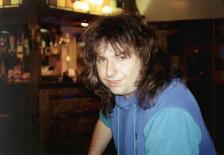 The creature in its natural habitat

Incidentally, if you think I come from Birmingham, the answer is No! Many people do use the Web to check on old friends, and this should help you work out if I am indeed, the correct victim.

I was born on the Isle of Sheppey to a couple of Schoolteachers in 1961. We made good our escape around 1968 to the small market town of Petersfield in Hampshire, then headed two years later for what was once the village of Kempshott, and which had been over-run by a dearth of housing estates as a part of the town planners nightmare of 'Basingstoke'.

Life starts to get interesting later on in 1973 when I spent a year in Maiduguri, Nigeria, then made it safely back to the UK in time to drudge through a few years in the living hell which was the Richard Aldworth School. At sixteen, I made it to Queen Mary's College in Basingstoke and spent two years as a member of the Drama Department's notorious 'Tech Kroo'. If you do have any affiliations over the period 1978-1980, please do drop me an e-mail at the address below - It may be a good excuse to get out for a few sherbets ! During that time, I'd also worked at Macmillan's the book publishers, and for the Horseshoe Theatre Company at 'Central Studio' and the Haymarket.

For the last nineteen years, I've been working as a Vision Engineer in the Outside Broadcast department of a rather well-known organisation, so I do get around a bit. I've been living in Greenford, Southall (On the North-East Frontier), and have now settled in Hayes, Middlesex.

I do get inquiries from prospective employers now and again regarding my availability for employment in the TV Broadcast world, and to a lesser extent in connection with some work I've done with the TCP/IP protocols over radio links. The news is that I haven't written my CV just yet, but am game for short secondments to emerging countries within the Commonwealth.